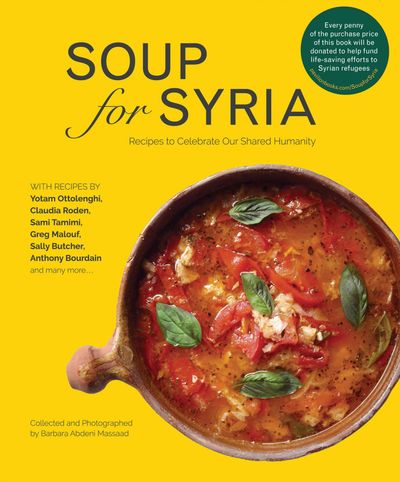 Soup for Syria: Recipes to Celebrate Our Shared Humanity

The world has failed Syria’s refugees and some of the world’s wealthiest countries have turned their backs on this humanitarian disaster. Syria’s neighbours—Lebanon, Jordan, Turkey and Iraq—have together absorbed more than 3.8 million refugees. The need for food relief is great and growing.

Profits from the sale of this cookbook will be donated to help fund food relief efforts to Syrian refugees.

Author: Barbara Abdeni Massaad
Format: Hardback
Release Date: 15/10/2015
Pages: 208
ISBN: 978-1-910904-04-6
Barbara Abdeni Massaad is a food writer, TV host and cookbook author. She is the author of the bestseller Cookbook Man’oushe: Inside the Lebanese Street Corner Bakery (Interlink). She won the the Gourmand Cookbook Award and the International Academy Of Gastronomy Award for Mouneh: Preserving Foods for the Lebanese Pantry. Born in Beirut, Lebanon, she moved to Florida at a young age and gained her real culinary experience while helping her Father in their family-owned Lebanese restaurant. After moving back to Lebanon in 1988 she decided to pursue her passion for cooking and trained with several renowned chefs at Lebanese, Italian, and French restaurants. She is a founding member of Slow Food Beirut and an active participant in the International Slow Food movement. She lives in Beirut with her husband and three children.