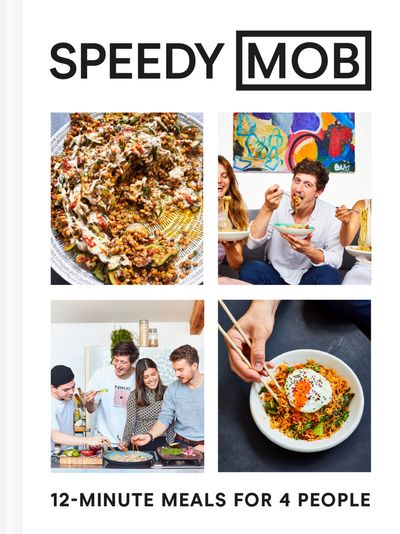 Ben Lebus returns with a third book in the series, this time with a focus on creating beautiful budget-friendly food, fast.

Speedy MOB works on the principle that if the cornerstone of your meal (e.g. pasta, rice, beans) take ten minutes to cook, then any recipe can take 12-minutes to prepare and serve.

It’s time to prep like a boss and get creative.

From the author of the No.1 Bestseller MOB Kitchen: Feed 4 or more for under £10.

Following on from the phenomenal success of MOB Kitchen and MOB Veggie, Ben Lebus returns, this time with a focus on creating beautiful budget-friendly food, fast.

Speedy MOB works on the principle that if the cornerstone of your meal (e.g. pasta, rice, grains) takes ten minutes to cook, then any recipe can take 12-minutes to prepare, cook and serve. So, it’s time to prep like a boss and get creative with your sauces, sides and dressings. Packed full of clever time-saving hacks and signature MOB Kitchen resourcefulness, you can go from chopping board to dinner plate in 12-minutes or less.

Each recipe is photographed in classic MOB style with chapters including: Brunch, Pasta, Rice and Noodles, Bowls and Sweet Stuff. Back with more recipes than ever before, Speedy MOB features over 75 all-new recipes for everything from Beetroot Sabich and Saag Paneer to Cheat’s Dan Dan Noodles and Crispy Beef Tacos.

The twelve-minute challenge has landed, so get ready, get speedy and feed your MOB.

Author: Ben Lebus
Format: ebook
Release Date: 03/09/2020
Pages: None
ISBN: 978-1-911663-59-1
Ben Lebus has always been passionate about food and learnt to cook from his father, who ran an Italian restaurant for a number of years. At university, he quickly saw that his flatmates did not share his knowledge of cooking, and their repertoire consisted of pasta with pesto. That was it; he decided to devise a list of recipes that would feed 4 people for under £10, wanting to show that it was possible to cook beautiful, healthy, delicious food on a budget. He launched MOB Kitchen three months after he graduated. The ‘thrifty home-cook’s unlikely hero’ according to the Daily Mail, Ben has harnessed a strategic group of supporters and collaborators, including sponsoring university sports team kit around the UK, collaborating with Waitrose, the Co-op, Sainsbury's and dating app Bumble. MOB Kitchen has 180K+ followers on Facebook and 530K+ followers on Instagram.