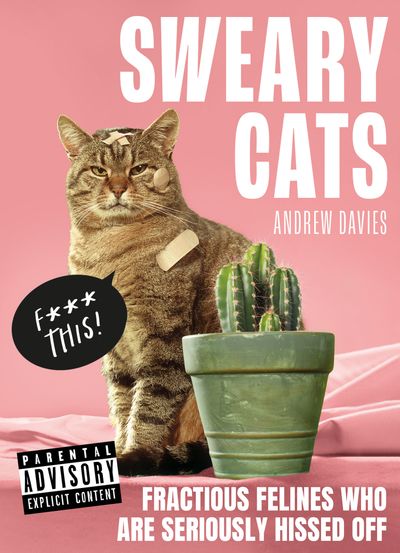 Underneath that chilled exterior is a potty-mouthed mouser ready to let rip. Sweary Cats features over 60 fabulous felines itching and scratching to tell it like it is, either through withering sarcasm or deeply insulting remarks.

Cats may have a reputation for being passive and chilled, but the phrase ‘cool for cats’ couldn’t be further from the truth. Cats are some of the angriest animals in the pet kingdom, they’re just very very good at hiding it.

For the first time Sweary Cats reveals the true emotions bubbling under the surface in cats’ anxious lives, whether it’s the failure to receive a variety of moist pouches, getting dressed up in costumes for their owner’s Christmas cards, or being taken to the vets – again.

Over 60 different cats reveal their frank thoughts on a variety of topics from fine dining to The Sound of Music – there’s no holding back when the claws are out. All kinds of domestic scenes are covered; cats in the bedroom, cats in the kitchen, cats in trees, cats in pipelines, cats leading orchestras and the inevitable cat sticking its nose in the litter tray.

The pictures may be cute in their own right, but commentary from Andrew Davies adds a hilarious dimension to these fractious felines.

Author: Andrew Davies
Format: ebook
Release Date: 27 Apr 2023
Pages: None
ISBN: 978-0-00-858909-7
Andrew Davies has always liked cats, ever since he collaborated with David Watts to produce The Thoughts of Chairman Miaow (2005) a unique combination of strident communist party posters and ickle pussy cats, presided over by the omniscient Miaow. He followed this up with the 300,000-selling When I Were A Lad series based on vintage photos of street kids, the last of which saw meerkats substituted for children. In Sweary Cats he gives voice to the pent-up anger and frustrations of domestic cats and their dealings with stupid, feckless, penny-pinching humans.