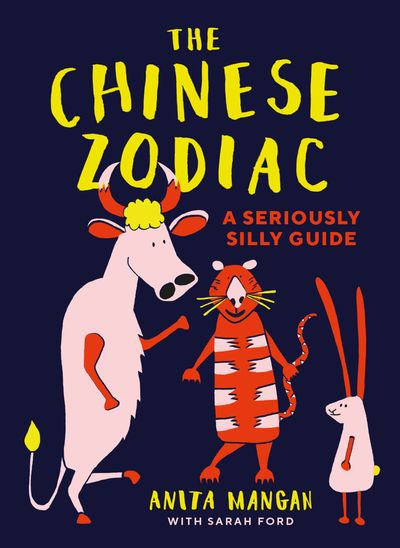 In this time of self-awareness and self-interest, The Chinese Zodiac takes an alternative and hilarious look at all 12 signs of the Chinese Zodiac, mixing together animal and human facts and drawing on themes such as personality, love, health and lifestyle, school/work to create a fresh and entertaining look at ourselves accompanied by quirky and colourful illustrations in this full-colour gift book.

The Chinese zodiac follows the moon (rather than constellations, as in the Greco-Roman zodiac system). It is divided into a 12-year cycle, with a different animal representing each year. The philosophy is deeply rooted in Chinese culture, and the zodiac, combined with the principles of yin and yang and the five elements, asserts a remarkable influence over people’s decisions and beliefs.

Author: Anita Mangan , Sarah Ford
Format: Hardcover
Release Date: 30 Nov 2021
Pages: 128
ISBN: 978-1-911622-54-3
Anita Mangan is a very successful graphic designer and illustrator. She illustrated the best-selling ‘Be a Unicorn’ series for Spruce (Hachette) and in September 2017, she published her first book ‘Bingo: an illustrated guide to Bingo Lingo’ to critical acclaim. Her quirky, humorous style keeps her in constant work and great spirits! Sarah Ford has worked in publishing for over 20 years. She has written 10 books on all manner of inane subjects. Her love of cats and cocktails, and knowledge of 80s pop music, knows no bounds. When not working she can mainly be found chasing a child, cat and several chickens round her almost tropical garden in Cheltenham. They are all faster than her.