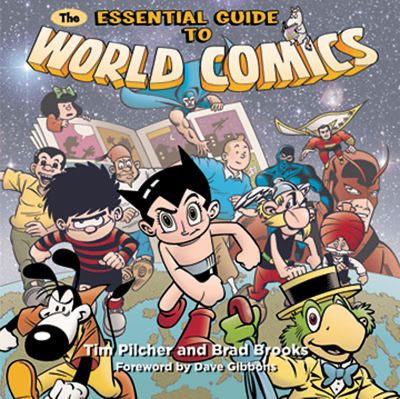 Most people’s perception of comicbooks is one of superheroes like Spider-Man and Batman.

But it belies an art form that is not unique to the UK and USA. Practically every country in the world has its own thriving comicbook industry. In some countries like France, they are a highly regarded form of expression – The Ninth Art. While in Japan, comics are so integral to its culture and society that it would be impossible to imagine the country without them. The cultural impact of comics cannot be underestimated. Did you know that sales of Mexico’s leading comic outstrip those of the country’s bestselling daily newspaper by six to one? Or that comicbooks are often used to convey a very serious message (only recently a comic featuring Superman was distributed to 500,000 children in Kosovo to teach them how to spot and avoid land mines)? Arranged geographically, this book assesses the medium in every major area of the world, discussing the history of the genre, the comics and characters, the publishers, creators and artists. Regions covered include the UK and United States, central Europe (France, Belgium, Germany, Spain, Italy), Eastern Europe, Scandinavia, Japan and Asia, Africa, India, Central and South America, and Australasia. Including key feature spreads and a wealth of colour images – many of them unseen – this book is the first of its kind to provide a global picture of an often-underrated art form.

Author: Tim Pilcher
Format: Paperback
Release Date: 24/10/2005
Pages: 320
ISBN: 978-1-84340-300-5
Tim Pilcher is a pop culture expert who has spent 20 years working in and around the comics industry, as an assistant editor for DC Comics’ Vertigo imprint, and as an associate editor of the industry tradepaper, Comics International. He also co-founded Les Cartoonistes Dangereux publishing house. He lives in Brighton, England.