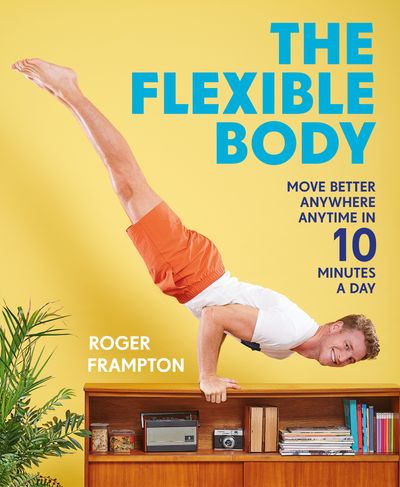 Just 10 minutes of training per day can help you work towards unlocking your body’s full potential.

Beginning with a basic squat (which we as children do naturally but then as adults struggle to perform), ‘The Flexible Body : Move better anywhere, anytime in 10 minutes a day’ guides you through a series of positions, stretches, rolls and balances that re-train your body to move like it once could.

Forget everything you think you know about exercise. International model and fitness expert Roger Frampton has developed a revolutionary new approach to movement, designed to get your body working in the way it was designed to.

We are born with perfect spines that can move in millions of ways. But our sedentary western lifestyles rob us of our natural range of motion and leave us with stiff bodies, bad posture and a high incidence of back pain. Inspired by advanced yoga practitioners and Olympic gymnasts, and in consultation with leading figures from both fields, Roger has developed a simple but highly effective set of exercises known as the Frampton Method, designed to de-restrict your body and help you reach optimum strength and flexibility with no need for any kind of equipment, weights or gym membership.

Split into method and movement sections, the movement sections covers a range of positions from hip actions to headstands, and then explain how to take each movement to the next level as you become more advanced.

With a thorough explanation of the philosophy and science behind the method, plus hacks for incorporating it into your day-to-day life, this book will inspire you to put down the weights, forget HIIT, reclaim your body and achieve a level of fitness you’ve only ever dreamed of.

Author: Roger Frampton
Format: ebook
Release Date: 04/01/2018
Pages: None
ISBN: 978-1-911595-87-8
An international fashion model for brands including Calvin Klein, Ralph Lauren, Dolce & Gabbana, John Paul Gaultier and YSL, Roger is also a sought-after personal trainer whose approach to fitness is heavily informed by yoga and gymnastics.Working alongside Ashtanga yoga teachers and British Gymnastics coaches, Roger’s unique movement practice aims to teach the body to move as it was designed to. His popular TED talk, ‘Why Sitting Down Destroys You’, has had 2.5 million views, and he is the face of multiple fitness festivals including Sweatlife, and Stylist Live. Roger has been featured in Sunday Times Style, GQ, Esquire and Attitude magazines, and is a guest writer for Metro and Men’s Health. He was also named one of the eight 'bodies' of 2017 in Men's Health The Body Issue alongside Rio Ferdinand and Max Whitlock.