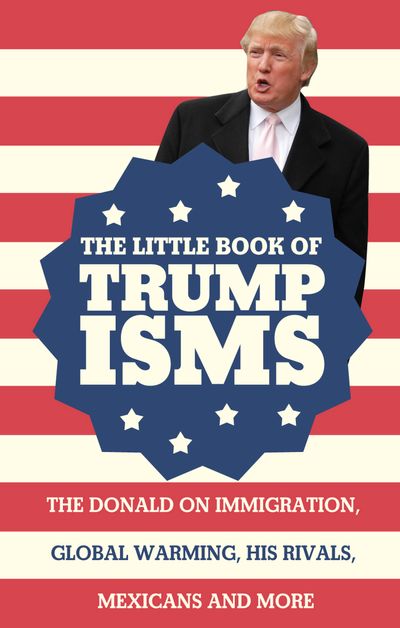 The Little Book of Trumpisms: The Donald on immigration, global warming, his rivals, Mexicans and more

A hilarious and horrific collection of Donald Trump’s no-holds-barred opinions, brought together in one handy volume.

It contains the rug-haired one’s charming and intelligent thoughts on his opponents (‘Hillary Clinton was the worst secretary of state in the history of the United States’), on romance (‘All the women on The Apprentice flirted with me. That’s to be expected.’), the enviroment (‘Is our country still spending money on the GLOBAL WARMING HOAX?’), and much more. Read this book for a terrifying insight into the mind of the man who wants to be the most powerful leader in the world.

Author: Seth Milstein , Bill Katovsky
Format: Paperback
Release Date: 28 Apr 2016
Pages: 120
ISBN: 978-1-911042-38-9
Seth Millstein is a political journalist whose work has been published by media such as Bustle, The Daily and Huffington Post. He lives in Oakland, CA.Bill Katovsky was a journalist and editor, and the author of books such as The World According to Gore, Patriots Act and Embedded: The Media at War in Iraq. He worked in media for more than 31 years, and passed away in November 2015.