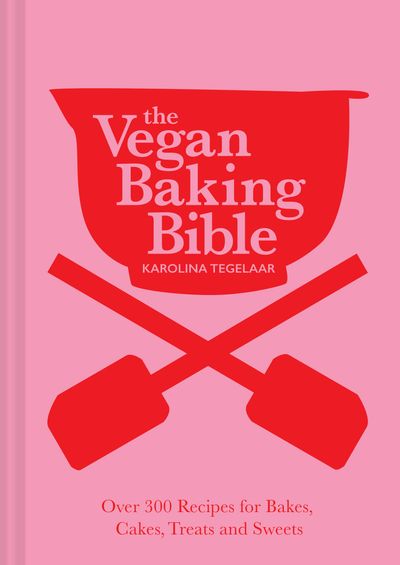 The Vegan Baking Bible: Over 300 recipes for Bakes, Cakes, Treats and Sweets

You shouldn’t have to compromise on flavour, texture and the look of your cake just because it’s vegan. From carrot cake and chocolate cookies to madeleines and muffins; in this ultimate bible, Karolina has veganised old baking favourites as well as creating new baking recipes to make vegan baking accessible and fun to the novice baker.

Over 10 years of hard work and trial-and-error, the talented Karolina Tegelaar has created the ultimate vegan baking book – a must-have for every baking-enthusiast’s kitchen. Vegan baking has been revolutionised by the introduction of aquafaba and plant-based dairy products, and this definitive bible chronicles everything you need to know to create all the baking classics, as well as new and interesting bakes, using the latest techniques. With this book, you’ll never again have to make compromises on flavour, texture and design when baking vegan.

Packed with hundreds of tips, techniques and troubleshooting advice, The Vegan Baking Bible includes everything from cakes, muffins, meringues, biscuits, cookies, brownies, gingerbread, ice cream and even a whole section on yeasted doughs and pastries so you can make bagels, doughnuts and pain au chocolat, too.

With The Vegan Baking Bible by your side, you’ll never stop saying, ‘I can’t believe it’s vegan!’.

Author: Karolina Tegelaar
Format: Hardback
Release Date: 04 Aug 2022
Pages: 448
ISBN: 978-1-911682-49-3
Karolina Tegelaar has 15 vegan books to her name, which she has written over the last 10 years. She has collated all her favourite recipes into this bible, which won a prize for the Best Baking Cookbook of 2020 in Sweden (chosen by the gastronomic academy at the University of Karlstad). Karolina grew up on a farm and studied animal husbandry, which has led her to believe that being vegan is the only answer. She has a phD in biology and her scientific training has helped her methodically develope recipes that are perfect. Some of her recipes have been tested over 100 times.