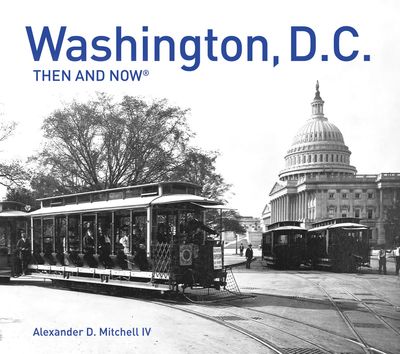 Washington, D.C. Then and Now presents a fascinating portrait of the evolution and history of America’s capital city since the dawn of photography in the mid-nineteenth century.

It pairs vintage black-and-white photographs—including those of pioneers of American photography such as John Plumbe and Mathew Brady—with splendid color photographs taken from the same vantage points today.

It also features some breathtaking vintage panoramas taken from the Washington Monument showing the nascent capital in glorious detail.

Author: Alexander D. Mitchell IV
Format: Paperback
Release Date: 06/11/2017
Pages: 144
ISBN: 978-1-911595-02-1
Alexander D. Mitchell IV is a writer and photographer who specializes primarily in railroad and transportation issues and history. His articles and photographs have appeared in numerous magazines and newspapers, including Trains and Railfan & Railroad. Born and raised in Selinsgrove, Pennsylvania, he now resides in Baltimore, Maryland.