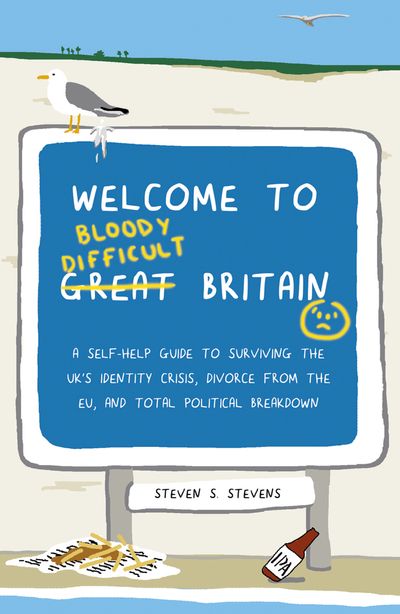 Welcome to Bloody Difficult Britain: A Self-Help Guide to Surviving the UK’s Identity Crisis, Divorce From the EU, and Westminster’s Total Political Breakdown

We have never had it so bloody difficult! The pound crashing at every turn, austerity measures bringing the NHS and the education system to its knees? Hard Brexit, soft Brexit, fried Brexit on toast? Crazy coalitions and divisive devolution. What next – a plague of locusts?

Unpack your political troubles from your old kit bag with the help of this mindful guide to surviving in these tumultuous times. Learn to embrace new relationships and say goodbye to old alliances, be strong and stable as you navigate the difficult political terrain. And remember to smile, smile, smile (even if your face is aching and you want to move to New Zealand).

From the author/illustrator team that brought you The Brexshit Book and What the Trump?!, Welcome To Bloody Difficult Britain will refresh the parts other political satire books cannot reach.

Introducing a whole new cast of characters to help us tiptoe through the political minefield:

Theresa Meh: Like Theresa, take a more carefree approach to serious issues such as a crumbling NHS and a nation sick of cuts and austerity.

Jeremy H. Corbyn: Have belief! Crucified by the media and given up for dead by the pollsters, JC has shown us that it is possible to rise and rise again.

David ‘Dickie’ Davis: The minister responsible for negotiating our exit from the EU and former presenter of ITV’s World of Sport knows a thing or two about two men in a room thrashing it out – remember Big Daddy and Giant Haystacks?

Jean-Claude ‘Van’ Junker: be tough like the Muscles in Brussels.

And learn to laugh again with BoJo the Clown.

Author: Steven S. Stevens
Format: Paperback
Release Date: 07/09/2017
Pages: 160
ISBN: 978-1-911042-95-2
Steven S. Stevens is a made-up author. If he did exist, he would probably live in London, England, and would have possibly spent most of his career penning various BBC and Channel 4 sitcom scripts, TV pilots, kids’ comedy series etc, etc. And he might even be comprised of three separate, middle-aged men. Who knows? Steven S. Stevens did not go to Oxford, or Cambridge either (that is if he did exist, which he doesn’t).