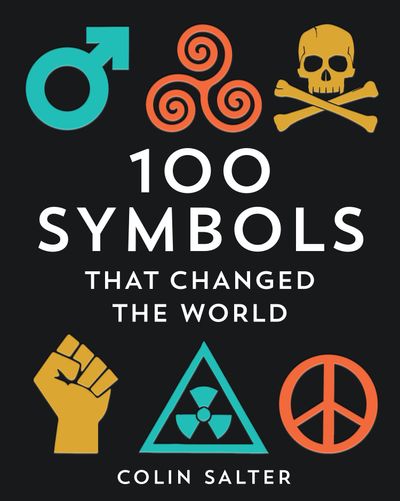 100 Symbols That Changed the World

100 Symbols That Changed The World looks at the genesis and adoption of the world’s most recognizable symbols.

Universal symbols have been used as a form of communication from the Bronze Age, when the dynasties of ancient Egypt began the evolution of the thousand characters used in Egyptian hieroglyphics. In pre-Columbian America the Mayan civilization set out on a similar course, using pictures as a narrative text.

With the adoption of written languages, symbols have come to represent an illustrated shorthand. The dollar sign in America evolved from colonists’ trade with the Spanish, and the widespread acceptance of Spanish currency in deals. Merchants’ clerks would shorten the repeated entry of “pesos” in their accounts ledgers, which needed to be written with a ‘p’ and an ‘s’. A single letter ‘s’ with the vertical stroke of the ‘p’ was much quicker. Historically correct dollar signs have a single stroke through the ‘S’.

Symbols are also used to impart quick, recognizable safety advice. The radio activity symbol was designed in Berkley in 1946 to warn of the dangers of radioactive substances – and following the widespread use of gas masks in WWII, the trefoil symbol echoed the shape of the mask.

There are many symbols of affiliation, not only to religious groups, but support of political causes or even brand loyalty. Symbols are used for identification, military markings and recognition of compatibility. They allow users to convey a large amount of information in a short space, such as the iconography of maps or an electrical circuit diagram. Symbols are an essential part of the architecture of mathematics.

And in the case of the 1964 Tokyo Olympics – the first Games to be held in an Asian country – symbols allowed the organizers to create event signage that wouldn’t be lost in translation. The set of Olympic sports pictograms for the Games was a novel solution, and one that was added to in Mexico and Munich.

Organized chronologically, 100 Symbols That Changed The World looks at the genesis and adoption of the world’s most recognizable symbols.

Praise for Colin Salter’s 100 Posters that Changed the World: -

”'Showcase[s] an extensive collection of the images and slogans that have shaped society as we know it.” - - Country Life

'This journey through images that can inspire, shock or just leave the viewer laughing is never less than fascinating… A beautifully produced volume that will find a very broad readership.' - All About History -

”'This engaging book is a vivid tapestry of poster styles with diverse commercial, cultural and political applications supplemented by informative single-page essays that stimulate curiosity page after page.” - - Morning Star