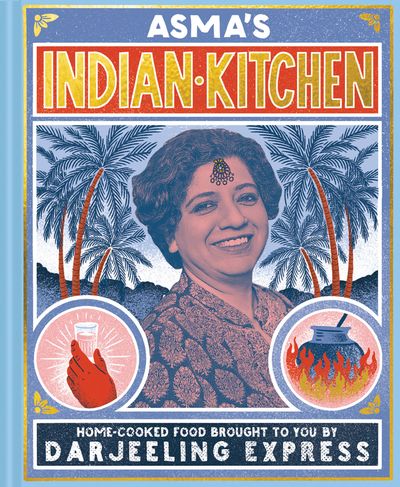 Award-winning restaurant Darjeeling Express began life as a dinner party with friends; Indian food lovingly cooked from family recipes that go back generations. In this book, Asma reveals the secret to her success, telling her immigrant’s story and how food brought her home.

The recipes pay homage to her royal Mughlai ancestry and follow the route of the Darjeeling Express train from the busy streets of Bengal, through Calcutta, where she grew up, and along the foothills of the Himalayas to Hyderabad. This is more than just a collection of delicious and accessible recipes, it is a celebration of heritage, culture, community and quality.

Author: Asma Khan
Format: Digital download
Release Date: 04/10/2018
Pages: None
ISBN: 978-1-911624-83-7
Asma Khan moved to Cambridge in 1991 with her husband. She comes from a royal background – Rajput on her father’s side and Begali on her mother’s. After training as a lawyer Asma registered for a food business, which began life as a supper club in her home in Kensington. In 2015, she opened a pop-up in Soho to much acclaim, and Darjeeling Express the restaurant opened its doors in June 2017, perfectly positioned in Kingly Court in central London. Darjeeling Express has been joined by its sister site Calcutta Kitchen in Fulham. Asma was voted ‘Female Entrepreneur of the Year’ at the Asian Restaurant Awards 2018, as well as ‘Entrepreneur of the Year’ at the Asian Women of the Year Awards.