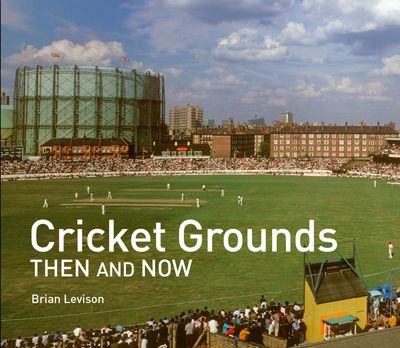 A history of beloved cricket grounds from around the world. Using a Then and Now format, historic pictures of cricket grounds are paired with their modern-day equivalent to show the dramatic changes that have taken place.

Cricket Grounds Then and Now is a history of some of the most famous cricketing venues from around the world, told through the format of Then and Now photos.

Author of the bestselling Remarkable Cricket Grounds and Remarkable Village Cricket Grounds, Brian Levison, has assembled a stunning array of vintage photos of the major Test venues such as Lord’s, The Oval, Old Trafford, Trent Bridge, Adelaide and the Sydney Cricket Ground, with which are paired a modern photo from the same viewpoint.

There are smaller venues too – Saltaire in Yorkshire with its World Heritage mill as a backdrop; New Road, Worcester, viewed across the River Severn from the Cathedral and Ickwell Village Green with its large oak tree firmly inside the boundary rope.

The photos show how some features survived for decades – such as the famous scoreboard on the SCG ‘Hill’ – or the standing terraces at St.Helens. Some grounds, such as the Central Ground in Hastings, have disappeared altogether.

At the larger test venues in Australia, drop-in pitches are now the norm, allowing multiple use of the huge stadia, while in the UK, the county ‘outgrounds’ have gradually been whittled away. Yorkshire have lost Brammall Lane in Sheffield, Kent have abandoned their occupancy of Dover and Maidstone, while Essex have left Leyton in East London.

Cricket Grounds Then and Now is a nostalgic trip around the world’s cricketing venues showing both massive changes across a century and occasionally (Cheltenham College) no change at all.

Author: Brian Levison
Format: Digital download
Release Date: 01/07/2022
Pages: None
ISBN: 978-1-911670-14-8
Brian Levison has a lifelong interest in cricket and played club cricket for several years. His books include the highly acclaimed cricket anthology All in a Day's Play (Constable, 2012) and Amazing & Extraordinary Facts: Cricket (David & Charles, 2012). He was one of six writers and commentators selected for the MCC's 'Cricket's Crown Jewels' exhibition in the Lord's Museum celebrating 150 years of the Wisden Cricketers' Almanack in 2014.