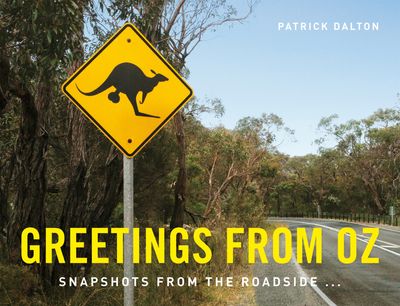 Greetings from Oz: Snapshots from the roadside

A hilarious, warts-and-all collection of photographs of the world’s most crazy country, seen through the eyes of its own locals and Patrick Dalton – the quintessential Englishman down under.

Welcome to Australia. One of the most far-flung and beautiful destinations in the world. Home to the dreamiest coastlines and cityscapes human beings have ever clapped their eyes on. Home of dags, bingles, snags and sangers, Australia boasts some of the planet’s most exotic, dangerous and unique species of animal and insect and, irrefutably, the most inspiring outback terrain and ocean vistas known to man. It is the country referred to as the land of the plenty, God’s Own Country. And it’s true. It is. But God’s been a bit absent lately. Which is why, now, after all these years, Australia has started to look a little shitty. A little overgrown. A little bit long in the tooth. It is, in short, a country in need of a good hose down … and a hug.

This is a hilarious collection of photographs of one of the world’s most ridiculous countries at its worst. The photos reveal the eccentricities, bleakness and humour of every nook and cranny of the entire country – the dry bleak deserts and the over-the-top natives. Shit Australia is a warts-and-all walk around the world’s most crazy country, seen through the eyes of its own locals and Patrick Dalton – the quintessential Englishman down under.

Author: Patrick Dalton
Format: Hardback
Release Date: 05/06/2014
Pages: 112
ISBN: 978-1-907554-83-4
Patrick Dalton was born in London and has lived in London his entire life (not including holidays). Professionally he is radio producer who worked for many years at the BBC and later at the London radio station LBC producing a variety of news and entertainment programmes.Patrick is the creator of www.shitlondon.co.uk