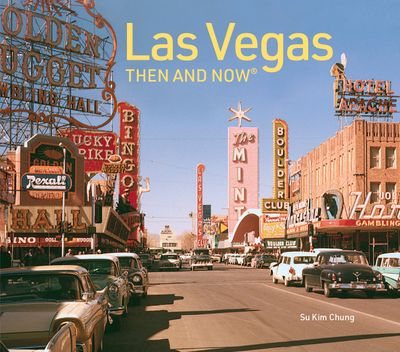 Las Vegas Then and Now pairs vintage shots from 100 years of the city’s history with the same view today.

‘Las Vegas Then and Now’ captures the city’s evolution from a desert railroad outpost into the gambling and entertainment capital of the world. Pairing historical photographs of the town with specially commissioned views of the same scene today, this book provides the reader with an intriguing look into the history of a city that has become a cultural icon.

Historic Fremont Street, which has recently undergone a multi-million dollar renewal programme, presents the most vivid contrast between the dusty desert town of the 1920s and the pulsating entertainment city we know today.

Las Vegas is ever changing – the popular Mermaids and Vegas Vicky on Fremont are gone, but further down the Strip, the High-Roller has arrived, one of the world’s tallest observation wheels befitting this thrill-seeking town. Casinos on the Strip have changed too. The Sahara closed in 2011, re-opened as SLS which also closed, and has now re-opened as The Sahara!

Experienced ‘Then and Now’ photographer Karl Mondon takes to the skies of Vegas to get some inspiring comparison shots, while author Su Kim Chung once again points out the changes to a city she has written about for the last twenty years.

‘Las Vegas Then and Now’ truly captures the buzz of a city where the only constant is change.

Author: Su Kim Chung
Format: Hardback
Release Date: 24/11/2022
Pages: 144
ISBN: 978-1-911682-81-3
Su Kim Chung has been immersed in the history of Las Vegas since she began work in the UNLV Libraries Special Collections Division in 1999. As Head of Public Services she has helped hundreds of researchers in their quest to find significant and interesting historical documents and photographs on the history of Las Vegas. Chung also serves as the curator of entertainment, LGBT and women’s history collections. In addition to an MA in history from CSU Fresno, she has a Ph.D and an MLIS information studies from UCLA.

‘Fascinating … The tome matches mesmerising historical images of yesteryear Las Vegas … with specially commissioned photos of the same scenes in the modern era. The contrasts are astonishing' - Mail Online -