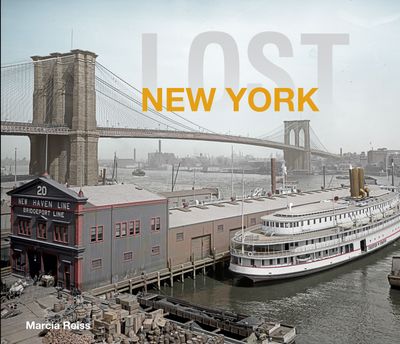 Profiles places in New York City that have been destroyed, altered, and/or demolished during the twentieth century, with photographs of the original structures, background information, and stories about memorable individuals.

The Lost series looks at the cherished places in a city that time, progress and fashion have swept aside. As well as celebrating forgotten architectural treasures, Lost New York also looks at buildings that have changed in use or simply disappeared from the streetscape.

Organized chronologically, the losses date from the mid-nineteenth century, the dawn of photography, to twenty-first century losses, such as the classic Moondance Diner which was shipped off to Wyoming in 2007.

First published in 2011, Lost New York has been revised and redesigned for 2020, including an extra 32-page section, with more losses from the twentieth  century inserted throughout the book and further losses since the book was first published.

Author: Marcia Reiss
Format: Hardcover
Release Date: 24/03/2020
Pages: 176
ISBN: 978-1-911641-37-7
Marcia Reiss is the author of Central Park Then and Now (2010); New York Then and Now (2005); Manhattan in Photographs (2005); Architectural Details (2004); Architecture in Detail: New York (2003); Brooklyn Then and Now (2002); and a series of guides to historic Brooklyn neighborhoods for the Brooklyn Historical Society. She was Policy Director of the Parks Council, now New Yorkers for Parks, and previously Public Affairs Director for the New York City Department of Ports and Trade. She also taught at Columbia University and Hunter College, and was a reporter for the Brooklyn Phoenix. She and her husband are former residents of Brooklyn and Manhattan and now live in upstate New York.