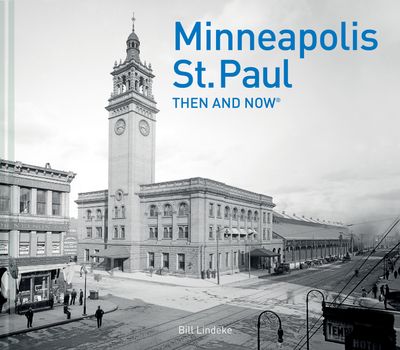 Locked together in an affectionate sibling rivalry, Minneapolis and its twin city St.Paul are constantly growing and changing. Minneapolis-St.Paul Then and Now shows how Minnesota’s two largest cities have expanded along the banks of the Mississippi river and merged over the last 150 years.

(Although if St. Paul had stuck with its original name it would be Minneapolis-Pig’s Eye Landing, the name came from a notorious whiskey runner.)

The long and cold Minnesota winters and humid summers have spawned an architecture to feat the weather with indoor shopping malls, domed stadia, skyways and a whole host of sports and celebrations that thrive in this climate. The St. Paul Winter Carnival is the oldest winter celebration in North America.

Using archive photos pairing vintage photos from the nineteenth and twentieth centuries with their modern-day viewpoint, local author Bill Lindeke shows how the Twin Cities have developed from simple trading posts on the banks of the Mississippi in “the land of 10,000 lakes.”

Author: Bill Lindeke
Format: Hardback
Release Date: 01/06/2018
Pages: 144
ISBN: 978-1-911216-98-8
Bill Lindeke has a PhD in Geography from the University of Minnesota, and has written for Minnpost, the Park Bugle, and Growler magazine, among others. He was born in Minneapolis, but has spent most of his time in St Paul and serves there on the Saint Paul Planning Commission and Transportation Committee.