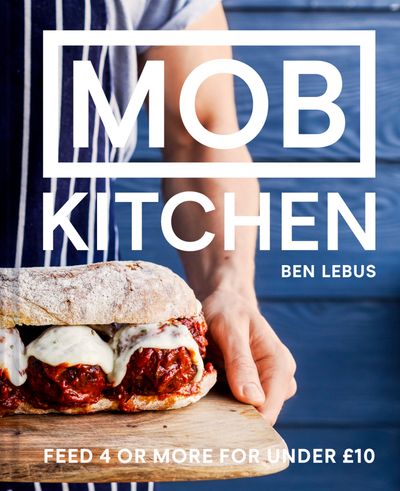 Having taken the social media world by storm with his 1-minute, how-to-make recipe videos, MOB Kitchen founder Ben Lebus is revitalising home-cooking with delicious, easy and accessible dishes that absolutely anyone can cook, all on a budget.

This, the first MOB Kitchen cookbook, contains all the inspiration you need to make budget meals to impress your friends and family, any time.

Each recipe is designed to feed four people for under £10. His mission is to mob-ilise cooks everywhere, young or old, and to inspire them to cook delicious, nutritious and inexpensive recipes. From Asian-flavoured spaghetti meatballs to the ultimate homemade falafel pittas, every base is covered, whether your mob is vegan, vegetarian, meat-loving or health obsessed. All that is expected is that you have salt, pepper, olive oil and a small budget, nothing more. Teaming up with musicians, as online, each recipe has a song that’s perfect to play as you cook and can be accessed directly through Spotify.

Author: Ben Lebus
Format: ebook
Release Date: 06/09/2018
Pages: None
ISBN: 978-1-911624-81-3
Ben Lebus has always been passionate about food and learnt to cook from his father, who ran an Italian restaurant for a number of years. At university, he quickly saw that his flatmates did not share his knowledge of cooking, and their repertoire consisted of pasta with pesto. That was it; he decided to devise a list of recipes that would feed 4 people for under £10, wanting to show that it was possible to cook beautiful, healthy, delicious food on a budget. He launched MOB Kitchen three months after he graduated. The ‘thrifty home-cook’s unlikely hero’ according to the Daily Mail, Ben has harnessed a strategic group of supporters and collaborators, including sponsoring university sports team kit around the UK, collaborating with Waitrose, the Co-op, Sainsbury's and dating app Bumble.  MOB Kitchen has 230K+ followers on Facebook and 460K+ followers on Instagram.