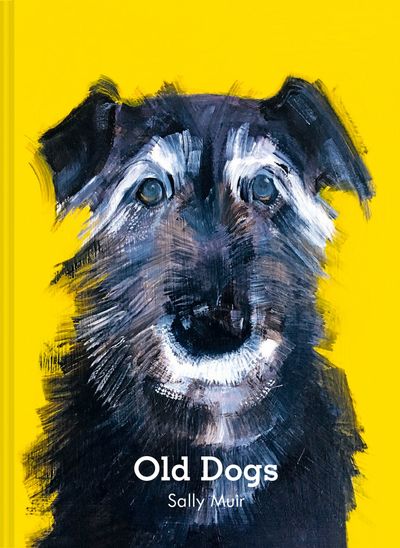 Following the success of A Dog a Day (Pavilion, 2017), Sally Muir returns with a collection of new, but crucially old, faces.

Several years ago Sally Muir began a Facebook project, posting dog art daily, which became the best-selling book A Dog A Day. Through the project she was introduced to endless people and their dogs, and the distinct personalities and complex emotions that owners attribute to them. More recently, Sally’s project changed focus and she asked the public to send in photographs of their old dogs. Featuring grey muzzles, milky eyes and wobbly legs, as well as tender anecdotes picked up from a whole lifetime of companionship, Sally Muir’s paintings of our more senior canines are collected here for the first time.

Sally Muir is well known for her portrayal of dogs, with Elderly Dog featuring in the Royal Academy Summer Exhibition in 2018 and Hound following up in the Summer Exhibition in 2019. The popularity of Elderly Dog has fuelled Sally’s desire to continue to paint older dogs, and celebrate the ageing process of our favourite pets in grace and style. From loose sketches and lithographs to potato prints and oil paintings, Old Dogs includes a range of mediums that Sally has become known for, and embraces dogs of all shapes and sizes: big, small, pedigree and cross breed.

Author: Sally Muir
Format: Digital download
Release Date: 18/08/2022
Pages: None
ISBN: 978-0-00-859163-2
Artist Sally Muir is based in Bath, UK and is a prodigious portrait painter of dogs. Other subjects include human portraits and landscapes, as well as the occasional rodent and bird. For years, Muir focused on her knitwear business, Muir & Osborne, as both a designer and author. With her partner Joanna Osborne, they have published seven knitting pattern books that include Best in Show, Knit Your Own Dog, (also Cat, Pet, Zoo, Farm and Dinosaur) and the children’s book Patch’s Grand Dog Show. Muir returned to university as a mature student with a concentration on Fine Art. Children’s portraits gave way to dog portraits. Muir is the recipient of many awards and her work appears regularly in galleries. She accepts and enjoys commission work — dogs and humans alike.