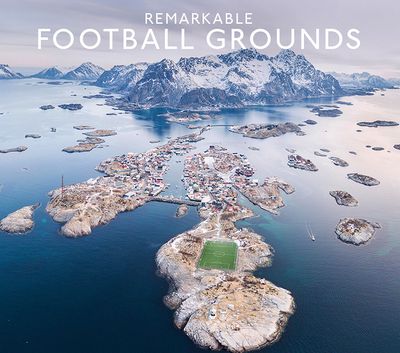 Remarkable Football Grounds is a collection of some of the most memorable places to watch and play football around the world. They range from the stellar stadiums of the Premier League to windswept islands in the Scottish Hebrides or the far-flung Pacific, including stadia that resemble flying saucers, a crocodile and an armadillo!

Remarkable Football Grounds is a collection of some of the most magnificent places to watch or even play football. They range from the stellar stadiums of the Premier League, La Liga, Serie A and the Bundesliga to windswept islands in the Scottish Hebrides, to the Maldive Islands where the nearest opposition is 600 kilometres away.

The book features a range of the oldest, biggest, highest, quirkiest and furthest flung stadia and the stories behind their existence. Italian Serie A team Venezia can be reached by canal, with moorings nearby; Bamburgh Castle football team plays in the shadow of a Game of Thrones-scale fortress, while Estadio Silvestre is a full-size pitch on the roof of a building in Tenerife.

Some of the oldest, storied stadiums are here, including Anfield for Liverpool, Fulham, which has a tunnel under the pitch and the two Dundee football clubs, that have large grounds, Tannadice and Dens Park, just 183 metres (200 yards) apart.

At the quirkier end of the scale Marina Bay in Singapore has a floating pitch, while in Gangwon, South Korea, the football pitch doubles as a ski jump landing area.

Many of the stadiums come with spectacular views. The Faroe Islands have produced some strong football teams in the past and many of their grounds are set in picture perfect landscapes. The same can be said of Norway’s Lofoten Islands where flat land is at a premium and the pitch sides are used for drying fishing nets. In Slovakia, the Janosovka football pitch has a narrow gauge railway that runs between the pitch and the grandstand.

Author: Ryan Herman
Format: ebook
Release Date: 10/11/2022
Pages: None
ISBN: 978-1-911682-90-5
The first football ground that Ryan Herman visited was Upton Park on Saturday, April 27, 1978, when Liverpool beat West Ham 2-0. His first published article appeared in the launch issue of FourFourTwo magazine in 1994. Around the same time, he started his first full-time job as a sports reporter, ticking off new grounds every other week as he travelled the country covering Chelsea, Fulham and Queens Park Rangers. He has written for a broad range of titles including The Rugby Journal, SportBusiness, as well as GQ where he wrote about his experiences at the Hillsborough disaster in 1989. He is currently a regular contributor for The New European newspaper covering sport and social issues.