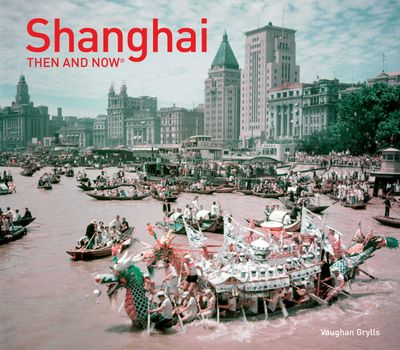 Vintage photographs of Shanghai in black and white and colour have been  matched with the same viewpoint today to reveal the history of this vibrant and rapidly expanding city.

Shanghai Then and Now brings together rare archival images of this thrilling cosmopolitan city and matches them with specially commissioned photos of the same sites as they appear today. Vaughan Grylls (author/photographer of four other titles in the Then and Now series: Oxford, Cambridge, Hong Kong and Singapore) has rounded up all of the key sites that make up this fascinating and diverse city, from Jesuit cathedrals, Jewish synagogues and Buddhist temples to neoclassical banks, art deco hotels, and the super-tall skyscrapers of the Pudong district. The breathtaking contrast between past and present make this a fascinating addition to the long-running Then and Now series.

Author: Vaughan Grylls
Format: Hardcover
Release Date: 01/02/2018
Pages: 144
ISBN: 978-1-911216-92-6
Vaughan Grylls is a photographer, author and artist. His photography has been shown in the Photographers’ Gallery, Whitechapel Art Gallery and the Arnolfini. He is represented in several public collections, including the National Museum of Photography, Film and Television, the Contemporary Art Society, Pfizer, Unilever and the Arts Council of Wales. From 1996 to 2005 Grylls was Chief Executive of the Kent Institute of Art and Design. In 2005 he founded the University for the Creative Arts at Canterbury, Epsom, Farnham and Rochester, and serves as Emeritus Professor. He is the author and photographer of Oxford Then and Now, Cambridge Then and Now, Hong Kong Then and Now and Singapore Then and Now.