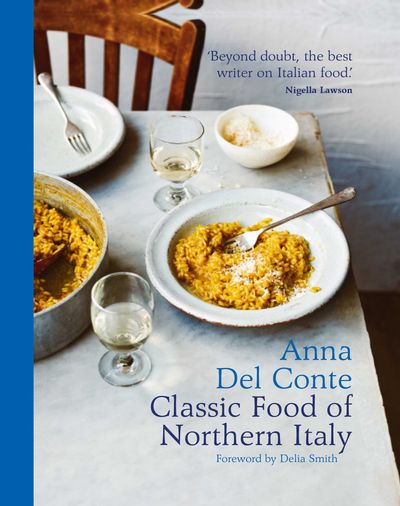 The Classic Food of Northern Italy

“With this book you will not only be able to cook authentic Italian food, you will also be able to go on an exciting journey of discovery throughout the whole of Northern Italy” – Delia Smith

The original edition of ‘Classic Food of Northern Italy’ in 1996 won both The Guild of Food Writers Book Award and the Orio Vergani prize of the Accademia Italiana della Cucina. In this updated edition, Anna Del Conte revisits classic dishes to show the best of northern Italian cuisine – both rustic and sophisticated.

In this collection of over 150 recipes Anna has chosen the very best ideas sourced from acclaimed restaurants, elegant home kitchens, rural inns and country farmsteads. Many of the traditional dishes may not be familiar, such as flatbread made with chickpea flour, Ligurian Ciuppin or macaroni pie in a sweet pastry case, but she also presents definitive versions of popular dishes such as Pesto, Ragu and Ossobuco. Her recipes are thoroughly researched and tested; she provides the home cook with a trusted and essential companion. This timeless cookbook is the quintessential bible for very kitchen.

Author: Anna Del Conte
Format: Digital download
Release Date: 15 Feb 2018
Pages: None
ISBN: 978-1-911595-85-4
Anna Del Conte is widely recognised as the doyenne of Italian cooking. Her books include Italian Kitchen, Cooking with Coco, Gastronomy of Italy and Anna Del Conte on Pasta. The original edition of Classic Food of Northern Italy in 1996 won both The Guild of Food Writers Book Award and the Orio Vergani prize of the Accademia Italiana della Cucina. In 1994 she won the prestigious Premio Nazionale de Cultura Gastronomica Verdicchio d\'Ora prize for dissemination of knowledge about authentic Italian food. She was also awarded the Guild of Food Writers Lifetime Achievement Award in 2011. In 2016 Anna appeared on the BBC programme The Cook Who Changed Our Lives with Nigella Lawson, which won \'Programme of the Year\' at the Fortnum & Mason awards 2017. Anna lives near her family in Dorset.