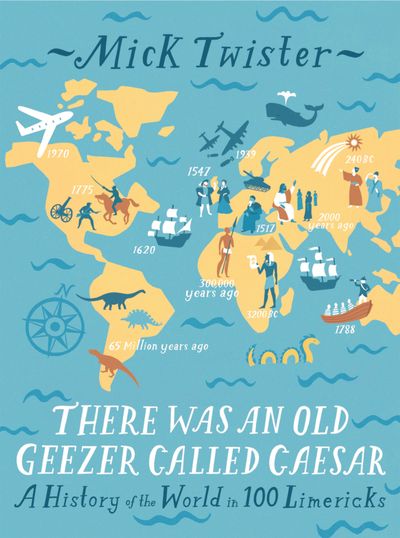 There Was An Old Geezer Called Caesar: A History of the world in 100 limericks

A history of the world in 100 lively limericks, accompanied by stylish illustrations.

There is a young fellow named Mick

To cover, with mirth

The whole history of Earth

And what made its characters tick.

There Was An Old Geezer Called Caesar is 100 lively and humorous limericks that take us back to before the beginning of time itself and right up until yesterday evening when you were probably making your dinner. Covering everyone’s favourite history lessons (and a few suprising ones too!), Mick Twister has cleverly raided the tomes of the past, picked at the bones of the world’s greatest figures, moments and events and condensed the most complex of human activities into five funny rib-tickling lines for your amusement. Who ever said that history was boring, had clearly never read this book!

Author: Mick Twister
Format: Hardback
Release Date: 05/09/2013
Pages: 128
ISBN: 978-1-907554-86-5
Mick Twister is a London-based television journalist in international news, and part-time cryptic crossword compiler. Since inventing the 'twitmerick' in May 2011, he has been tweeting the news in daily limericks as @twitmericks. Twitmericks have been reproduced by the Washington Post and New Statesman.