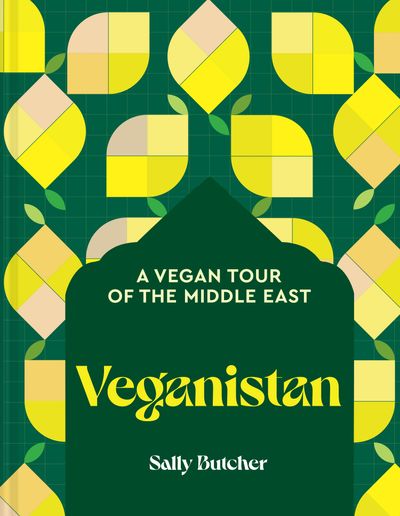 Veganistan: A vegan tour of the Middle East

Veganistan is a brand new volume from Sally Butcher following the silk trail started by Veggiestan and Persepolis.

Veganistan is a brand new volume from Sally Butcher following the silk trail started by Veggiestan and Persepolis.

The Middle East is a region lush in its vegetation, a gift to the non-meat-eater. Much of the cuisine is naturally vegetable based, with a lot of the flavour of recipes coming from the herbs, spices, cooking methods and sheer ‘joie de cuisiner’ traditional to Middle Eastern dining. Vegan diets can often be dismissed as lacking in certain nutrients, but there is no doubt that one thing a Middle Eastern kitchen teaches us is balance: every dish from a traditional kitchen is carefully crafted to offer a balance of ‘hot’ and ‘cold’ elements to satiate the four humours of medieval yore with pulses, grains, nuts and vegetables galore.

The original mission of Veggiestan was to celebrate vegetables in all their glory, rather than recreating meat dishes, and in Veganistan Sally Butcher starts to play more with seitan, tofu and tempeh using them as vehicles to showcase the wonderful range of flavour this cuisine offers. This is not a book written from a moral point of view, but primarily from a food angle, a way of bigging up and celebrating the wonders of Central Asian, Iranian, Turkish, Arabic and East African vegetable cookery and creating a volume of accessible dishes.

Contents:
Simple Meze
Salads and Cold Starters
Soups, Snacks and Hot Starters
Bread, Rice and Grains
From the Stewing Pot
From the Oven
From the Frying Pan and Into the Fire
Salted, Smoked, Fermented and Pickled Foods
Sweet Treats
Drinks
A Cheater’s Guide to Vegan ‘Meat’: ‘Dairy’ and ‘Egg’ Substitutes

Author: Katie Toogood
Format: Digital download
Release Date: 08/12/2022
Pages: None
ISBN: 978-1-911682-98-1
Sally Butcher is the fiery-haired proprietress of the notable Persian food store Persepolis in Peckham, London, which she runs with her Persian husband, Jamshid. She is a bestselling author and avid blogger, who has amassed a devoted online following for her food-, shop- and Peckham-related musings. The foodie delights of the Middle East are her specialist subject, but she has been known to venture far and wide for inspiration. Her first book, Persia in Peckham, was published to critical acclaim and short-listed for the 2008 André Simon Award. It was also selected by the Sunday Times as their cookery book of the year. Her following tomes, Persepolis, Veggiestan and Snackistan, published by Pavilion, have also received critical acclaim.